skip to main | skip to sidebar

Take the sensor values to the phone..

After real time sensor work at Southwest Uwave, I carried the UI display of values...to the phone. 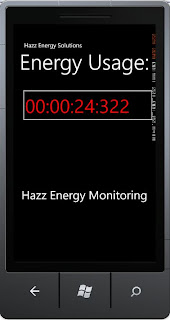 Posted by Greg Hazzard at 2:41 PM No comments:

I gave a talk Wednesday evening at the Phoenix Silverlight User Group on the Managed Extensibility Framework (MEF). I'm using it just for its plugin capabilities. I have three Modules (Visual Studio Projects) which, thanks to MEF, become Views on a Canvas (Region) as the snapshot below indicates. After 15 minutes of MEF, the conversation turned to Expression Blend 4 and I ended up learning alot more from the audience than they learned from me! 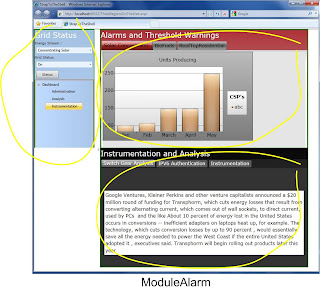 Posted by Greg Hazzard at 4:35 AM No comments: 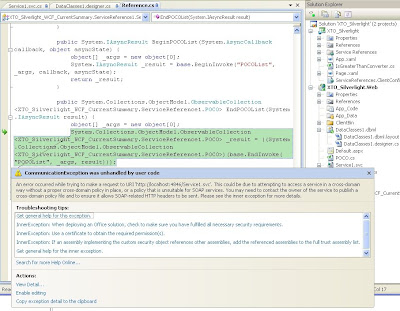 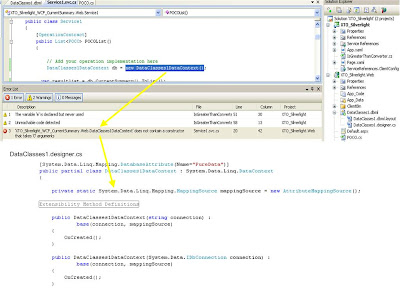 Posted by Greg Hazzard at 2:39 PM No comments:

Click on the images to better see this Windows Presentation Foundation dashboard I'm evolving. A special thanks to Trossen Robotics who helped me with the Phidgets used for real time Lumen and Temperature sensors, XAMLTemplates.net for the WPF syles/themes/templates, Teroid Software for the LED display, Microsoft Research for their Dynamic Data Display, and good luck for winning the raffle for the Infragistics WPF Chart Controls. 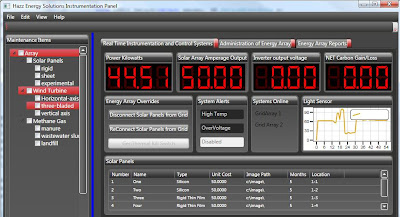 The dashboard will have one area for calculations an operator may want to have available. Historical data from light sensor that has been saved in SQL Server table. 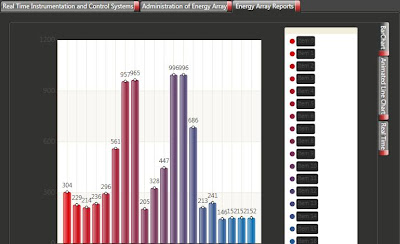 Historical light sensor data. The animated plotting of this 3D line can't be seen here in this static image. 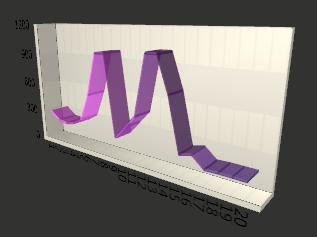 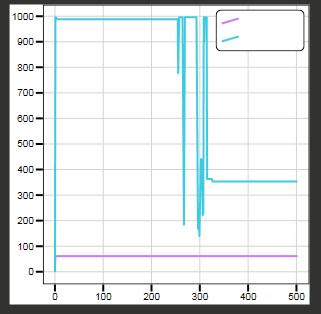 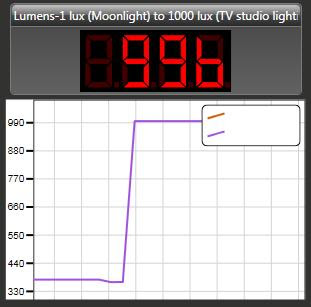 A c# generic dictionary key/value mapping is being used currently to map System.Time real time ticks to minutes:seconds on the Power Kilowatts LED display. That would need to be switched to a calculated value (voltage * current)with real sensors. I'll be using other Phidget sensors for proof of concept via USB I/O.

The Dispatcher object is being used for this current time implementation to keep the UI responsive.

Underlying the solar panel listview is an ObservableCollection but the application is not yet taking advantage of the SolarPanel class's INotifyPropertyChanged interface.

Here is the (clickable to better see) xaml databinding needed for that Solar Panel listview;

The business layer is in flux. The SolarPanel listview above is now joined by a TreeView ViewModel notion proposed by Josh Smith whose checkbox/toggle capabilities I want for the elements(devices) of various tree branches(device family, eneryg sources).


Since I won a year long Infragistic's subscription at my local .NET User Group, (thanks Pat/Arsen!) I'm using their WPF XamChart controls. The graphs above are showing historical device measurement data stored on a 60 second time interval.

The first real time graph of the sensors that just arrived is shown within the axis of the graph with the white background above. Light sensor results (wild fluctuation between natural sunlight, shade, electric light source)in light blue varying and temperature in purple at the bottom.. Courtesy of an open source dynamic data display library of controls from Microsoft Research . I converted their graph's window into a User Control(it's using the Dispatcher object so that's why they call it a WPF graph. It had regular Winform's textboxes to maintain info which I converted to a Sensor class with Content and 'Visible' properties) and plopped that into my Dashboard's tab control as an embedded control. This is what I already did with the two Infragistic's charts. I had to remember to that by losing the Form_Load part of the winform's process I had to create an Init function and call that explicitly from the constructor. Was I supposed to already know about the ThreadStart delegate?

The UI, the middle layer and the database all need to stay flexible for awhile.
Posted by Greg Hazzard at 5:26 PM 1 comment: my son Joel the inventor! Click on the picture!
Posted by Greg Hazzard at 11:18 AM No comments:

www.motionanalysis.com released Cortex whose transformation I initiated and whose baton I passed on to the very capable team there.
Posted by Greg Hazzard at 6:10 AM No comments: The late afternoon sun shines through the glass block to create a multicolor prism display penetrating the natural stone.
I designed and implemented the plumbing and waterproof backing behind this marble 'User Interface' as I design and implement logical middle tiers or plumbing layer behind a User Interface in my software projects. I'm finding WPF and Silverlight to be appropriate for the tasks at hand just as I did Sharkbite fittings, Grohe fixtures and DensShield® tile backer.
Click on image to get a better view.
Posted by Greg Hazzard at 5:41 AM No comments: